The numbers beat profit estimate, cheering investors. The stock soared to day's high of Rs 2,043 apiece on the BSE, up 6.2 per cent, as against 0.65 per cent rise in the benchmark S&P BSE Sensex

It set aside provisions worth Rs 436 crore in the September quarter of FY21.

Housing financier HDFC’s net profit for September quarter of FY21 tumbled 27.5 per cent to Rs 2,870.12 crore, less than Street's expectations of over 50 per cent decline, supported by gain from stake sale HDFC Life during the quarter. It had clocked a net profit of Rs 3,961.5 crore in the year-ago period.

"The Corporation has sold 26 million equity shares of HDFC Life Insurance Company Limited (HDFC Life) resulting in a pre-tax gain of Rs 1,240.59 crore," the management said in a statement to the exchanges.

The numbers beat profit estimate, cheering investors. The stock soared to day's high of Rs 2,065 apiece on the BSE, up 7.3 per cent, as against 0.65 per cent rise in the benchmark S&P BSE Sensex. The stock eventually settled 6 per cent higher at Rs 2,043 per share.

Analysts at ICICI Securities had expected the net profit to decline 54 per cent YoY to Rs 1,811.7 crore during the quarter.

"Despite elevated morat 2.0 print at 22 per cent, we anticipate less than 5 per cent restructuring. Factoring in home loan disbursements at 95 per cent of Q2FY20 (though conservative on non-individual side), we are building in asset under management (AUM) growth of 9-10 per cent. Also, we expect NIMs to be broadly steady QoQ," the brokerage had said in its preview report. READ ANALYSTS’ EXPECTATIONS HERE

For the recently concluded quarter, the net interest income (NII) came in at Rs 3,647 crore, jumping 20.7 per cent YoY from Rs 3,021 crore.Net interest margin (NIM) remained flat at 3.3 per cent.

Meanwhile, dividend income slipped 70 per cent YoY to Rs 323 crore during the quarter under review from Rs 1,073.8 crore reported in Q2FY20.

"The months of September and October 2020 have seen the strongest recovery since the outbreak of the pandemic," it added.

As regards home loans, HDFC said 35 per cent of home loansapproved in volume terms and 18 per cent approved in value terms have been to customers from the Economically Weaker Section (EWS) and Low Income Groups (LIG). The average home loan to the EWS and LIG segment stood at Rs 10.7 lakh and Rs 18.2 lakh, respectively. 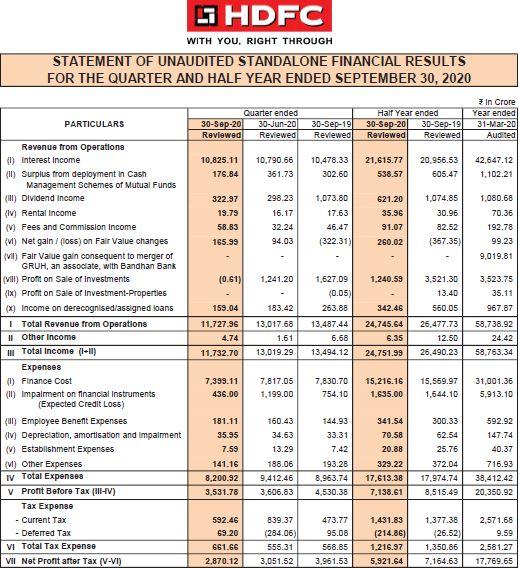 "If the Supreme Court order of maintaining the classification of accounts as status quo till further orders were not to be considered, the non-performing loans would have been only two basis points higher at 1.83 per cent of the loan portfolio; with individual NPLs at 0.88 per cent and non- individuals NPLs at 4.19 per cent," it said.