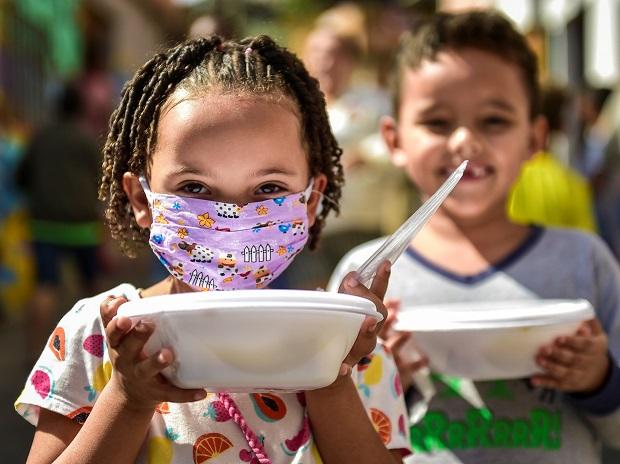 Global nutrition looks likely to get worse before it gets better. (Photo: Bloomberg)

Bumper harvests and healthy stockpiles coming into 2020 have helped the world dodge the worst of food-security worries triggered by the Covid-19 pandemic. Staples have been plentiful enough--and oil cheap enough--to avoid a repeat of the 2007-2008 crisis, and supply lines have held. Nutrition has suffered anyway. That’s the result of migrant laborers being kept home, children being shut out of school and workers losing jobs, in both emerging and developed markets. The economic consequences will linger.

Just over a decade ago, low stocks, bad crops and high crude prices (which drive up demand for biofuels and increase input costs) combined to cause crippling food inflation. Export bans also played a part. It’s cheering that such an outcome has been averted this time, in an otherwise grim year. There have certainly been glimpses of panic. Consumers rushed to empty supermarket shelves in the early months, while the likes of Vietnam, one of the world’s largest rice exporters, and Kazakhstan, a major producer of wheat and flour, imposed restrictions on shipments. There were disruptions, too, most notably when labor-intensive slaughterhouses and meat-packing plants became infection hot spots.

Yet the global system has proved remarkably resilient overall, with trade continuing and international cooperation prevailing, as Aurelia Britsch, head of commodities research at Fitch Solutions, points out. The context of ample food stocks and low prices helped, Britsch says; the picture might have been very different had the coronavirus hit in 2011. It’s a welcome achievement nonetheless, given four-fifths of us are fed at least in part by imports.

The bad news is that pressures aren’t easing. Prices are still modest in historical terms, but China has boosted purchases of late--pork production is normalizing after a huge African swine fever outbreak, and feed demand is rising --while wary, import-dependent governments like Egypt have been accumulating reserves. Unseasonable weather in the U.S. has hurt the crop outlook there, while droughts have hit Russia and South America. Contained global food costs haven’t stopped inflation spikes in India, Pakistan and elsewhere, as supply disruptions hit. With lockdowns coming back as coronavirus cases surge in the northern hemisphere, global nutrition looks likely to get worse before it gets better.

More worrying is that while food production and stocks have remained sufficient, household budgets haven’t. Even before the pandemic, the world was hungry. A report published in July by the United Nations’s Food and Agriculture Organization and others estimated almost 690 million people were underfed in 2019 — up by 10 million from the previous year, and by nearly 60 million in five years. Close to 750 million of us, or nearly one in 10, didn’t have reliable access to sustenance.

The pandemic has made that pain more acute, and nowhere more so than in emerging markets, with its armies of informal and migrant workers. The Asian Development Bank estimated in August that the global economy could lose more than $100 billion in remittances in 2020, and Asia and the Pacific alone could see transfers from abroad that are a fifth below 2018 levels, in large part because of lower sums from the Middle East. Tourism and leisure, significant earners for many countries, have been battered, while oil-exporting economies have found national coffers emptier as crude languishes.

Countries as varied as Indonesia and Brazil face a double burden with populations that are both underfed and overweight, thanks to cheap, widely available, ultra-processed food. This is a malnutrition time-bomb for public health and for the global economy that is getting worse under the pressures of 2020. Simply, nutritious food is too costly for more than 3 billion people. The July UN report puts a healthy diet, with costly dairy, fruit, vegetable and protein, at five times the price of meeting energy needs with starch.

The phenomenon isn’t confined to the least affluent countries. In the U.S., food banks have seen a surge in demand, while in the U.K., soccer star Marcus Rashford has stepped in to campaign for free meals for children while schools were closed.

The trouble with such widespread malnutrition is that the health and wider economic consequences persist. Decades of academic studies show there are costs to having citizens who are both underfed and overweight, not least due to associated illnesses such as diabetes. The World Bank has previously put the figure for Indonesia at 2% to 3% of gross domestic product. Beyond the cost of hospital admissions, there’s the lost potential of children whose growth is affected by a poor diet. Stunting, a marker of under-nutrition, tends to correlate with weaker cognitive development and earning potential.

Free meals for schoolchildren are a good place to start. A study published in the Lancet journal last year cited improvements in body mass indexes and height from school breakfast programs. A illustrative analysis of research done in Guatemala, Indonesia and Nigeria suggested that the benefits of such projects to improve diets outweighed the costs thanks to increased education, future earnings and avoiding premature mortality through obesity. In Indonesia, the return was more than four times the cost, and that was before the latest cataclysm hit. Governments should take note.